Word from the Rector 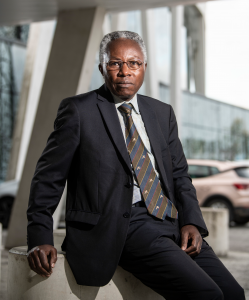 Word from the Rector

This new (2021-2022) academic year opened only on 05 January 2022 at the Université Catholique de Bukavu (UCB), with a delay relative to the initially planned starting date. If we look back at the last year, we can say that this is a much earlier start because the opening of the 2020-2021 academic year had to wait till 22 February 2021. These delays are due to the persisting COVID-19 pandemic, appeared in 2020. We were lucky for this new year that no additional lock-down period was imposed after the last one of December 2020 to January 2021. However new waves of the pandemic have continued to come and go, unfortunately with their deleterious effects, including the restriction on international mobility of lecturers and researchers, the negative effects on university finances, the suspension of new constructions, etc. We managed to have a few visiting lecturers, for example in the Faculty of Architecture & Urbanism, the Faculty of Law and the Faculty of Medicine, but they came in much small numbers compared to previous, normal years. Loss of life has been the most tragic consequence of the COVID-19 pandemic, and many of us lost dear relatives and/or friends. The University unfortunately also lost two students as well as one senior academic member, who passed away, although all not necessarily as a consequence of COVID-19. Fortunately, in the same year there were also happy events, including the travel of 10 students, accompanied by two staff members, who went to (and stayed for one month in) Antwerp, Belgium, in the frame of a student exchange program between UCB and the University of Antwerp. The students stayed in different guest families in order to get acquainted with life in Belgium but also had various academic contacts and activities. In the same month of November 2021, we held ceremonies for the closing of a 12-year institutional cooperation with Flemish universities. On that occasion, a 10-people delegation, led by KULeuven Vice-Rector Chris Van Geet, come from Belgium. Activities included presentations by international key note speakers but also by our local researchers who have been active in the program (see https://ucbukavu.ac.cd/international-university-cooperation/ ; https://www.kuleuven.be/global/news-items/GlobalDevelopmentBukavu). There were many other happy and less happy events.

During the 2020-2021 academic year there was no new major external source of income for the University. However, there was an increase in the local agricultural production, marked by a well-publicized production of maize flour. Positive public interest raised by this production made UCB become more confident in the fact that this is an area deserving more investment. Despite all financial constraints, a 5-% increase in the salaries of university staff was applied, with the objective to partly recover the 20-% salary cut imposed by difficult conditions a few years ago. Increased research productivity of the University was also apparent, with about 114 scientific papers published in international journals (to be compared with 29 publications officially reported for the whole University in 2019!), among which nearly 60 from the Faculty of Medicine and 20 from the Faculty of Agriculture. On the administrative front the mandate of the General Administrator was renewed for another 3-year term.

The question now is: what can we expect for this new year? At the end of the last year a few major reforms had already been decided by the Minister of High and University Education. First, he decided that the much awaited BMD (Bachelor-Master-Doctorate; also called LMD) system was now to be implemented with the opening of the 2021-2022 year. Then he also closed most existing faculties of Medicine, judged to be non-viable, recognizing only 16 of them which were allowed to pursue with the training of medical doctors. Because of its recognized academic standing, UCB is among the 16 universities allowed to run a medical school. Subsequently the Minister imposed a maximum on the number of students who can be admitted in the first Bachelor year of Medicine, and up to 500 students can be admitted in that class at UCB. Unfortunately, the admission is conditioned by the passing of an entrance examination, the access to which depends on the type of studies done during secondary school education. This is likely to limit access to medical training, and to decrease the number of students in medical schools. The least that can be said is that the implementation of the BMD system in all faculties and the management of admissions into medical school will continue to constitute major challenges for this year. The newly inaugurated Vice-Rector (Deputy Vice-Chancellor) for academic affairs will certainly address these challenges, hopefully with success.

On the student front, academic fees have not increased since 2019. Care was also taken to suppress fees destined to cover activities that in reality were not carried out (e.g., English courses in some study years). Student life continued to be somewhat restricted, but most of the planned sport and social events took place. We are also happy that the free-of-charge access to the Bukavu-Kalambo intercampus transport, already started at the end of 2020, was maintained, but an increase in the number of busses for this transport is needed. Contacts are still being made with the government in order to have UCB staff salaries be paid by the State, and also with private/charitable funders in order to finance the building of infrastructures, mainly on the Kalambo campus.

We trust that this academic year will be fruitful, and we wish good health to all staff members and students.